Firstly, there is a fall in new listings, a lack of rental properties available and high levels of interstate interest. Secondly, houses are getting multiple offers after just one open inspection.

There is a lot of pressure on you, you’ve probably missed out on several houses and are fed up spending hours online looking for your new home and then having to line up around the block.

There is only so much you can see during this rushed and busy inspection. Therefore, Trust Inspex to ensure that you haven’t missed anything at the open inspections today.

In short, Know the house before you fall in love with it!

Unsure of the process?

Call us before signing the contract, we will liaise with the agent and organise the inspection during your cooling off period or prior to auction. Meet us at the end of the inspection to discuss the findings and potential maintenance issues.

Some of our recent reviews

“He understood we were on a short deadline with our cooling off period and pulled out all the stops to make it happen and ease our mind.

The report was detailed and pictures clear (along with its explanations)

I made a list of concerns and things I personally wanted addressed and he included it all and more.”

“Anton was an absolute pleasure to deal with. Right from the first phone call he was friendly and helpful. He managed to make time to do our pre-purchase building inspection straight away and provided a thorough report on completion with recommendations on what needed urgent attention and how to fix it. Would highly recommend Anton and Inspex Building Inspections.”

We look forward to working with you.

Connecting downpipes is very important as the majority of houses built in South Australia have been built on highly reactive clay soils (H1 & H2) that swell on wetting and shrink on drying, in fact Adelaide has some of the most reactive soils in the country. This is why its so important to control the amount of moisture around your home, you want to keep it at a consistent level throughout the year. This means watering around the house during periods of drought and ensuring that stormwater is connected to drains discharging to the street or into sumps.

The below table shows the common amount of movement found at a site, this can be reduced simply by controlling moisture and connecting downpipes.

For the last 40 years, connecting downpipes has been standard practice, however, it is common to find older houses with downpipes still discharging water adjacent to the footings. Nine times out of ten, when you inspect a house that does not have downpipes connected you will also discover diagonal cracks as seen in the video.

Connecting downpipes to stormwater drains is a fairly simple process, sections of paving may need to be removed to allow pipes to run underneath and out to the street. An average cost of around $3000 should cover this process, another reason to have a pre-purchase building inspection done before buying.

Leakage is also common from old earthenware pipelines, which are susceptible to damage from soil movement and tree roots. If you suspect that leakage from the drainage system is contributing to problems with cracking (soil movement) or rising damp, it may be advisable to upgrade to a new PVC system.

Before considering replacing an earthenware or PVC drain, consider asking a plumber to block the pipe and do a static water test for leaks – it may be sound.

Reference: Maintenance and Repair of Older Buildings in South Australia – Department for Environment and Heritage

Maintenance and Repair of Older Buildings in South Australia

Anyone that owns an older house in SA should really have a read of this guide written by the Department for Environment and Heritage.

It has some very informative text and illustrations in regards to salt damp, cracking, ventilation etc.

“One of the two most common sources of dampness in old buildings is rising damp – moisture that rises
up from the ground into the base of masonry walls. When this moisture contains high levels of dissolved
salts, the problems of rising damp are compounded by salt attack. The action of the two together is
commonly known in South Australia as salt damp.

This is perhaps the single most destructive force at work against old buildings in South Australia.”

It also has a routine maintenance guide that you can follow during the different seasons.

Inadequate drainage in part of the garden is a problem that affects many gardeners. The problem can be a constant one where it occurs all year round or it may be seasonal. It might be that the stormwater drains into one corner of the yard resulting in at best moist soil and at worst a complete bog. It may be just a low spot that collects all the water from the surrounding area. Whatever the reason, there are ways of turning a boggy or wet area to your advantage. Some plants thrive in wet areas, and with the right plants, you can still achieve an interesting and attractive garden in a wet area.

What can cause wet areas in your garden?

Wet areas can be overcome in the following ways:

Get an earthmoving machine in (or do it by hand if it’s not a big job) and change the levels of your property so water drains away instead of collecting in any one part. Build a raised garden bed on the surface of the ground.

IF YOU HAVE NOWHERE TO DRAIN TO

Often the home gardener will find that they have nowhere to drain excess water to. One way of inadequate drainage is to dig a sump. Try to avoid placing it near other pipes, drains, etc. The technique for creating a sump is as follows:

It’s OK to fall in love with a house, but this should be after you’ve had it inspected.

Attending open inspections, one after the other can start to become a drag or you may have found what seems like your perfect home in just a few weeks, it is very important to keep your eyes wide open throughout this entire process.

The following is a quick guide for you to follow when attending open houses.

The first thing to look at when you arrive at the house is the slope of the block, does it look like water is draining towards the house? Drainage issues can cause movement and cracking of the foundations, it can also encourage termites.

Landscaping is important, is there paving around the perimeter of the home? Are there large trees near the house? Think of the damage a tree root can do to the pavement or footpath, they can do similar damage to the foundation of the home.
Leaves from trees can block gutters and downpipes causing them to rust and stormwater to overflow back inside.
Where does the stormwater go? Downpipes connected to stormwater drains or is the water being discharged next to the house?

Cracking of buildings is a major problem in Adelaide for two reasons: first, large areas occupy expansive soils (mostly black and red-brown clays); second, many dwellings are solid masonry because of a local timber scarcity, and solid brick houses are more prone to cracking than timber-frame brick veneer structures.

Nearly all older homes in Adelaide and even some newer homes will have cracks, the majority of these will be slight and not of concern, however, some houses will have significant structural cracking which could be very costly. 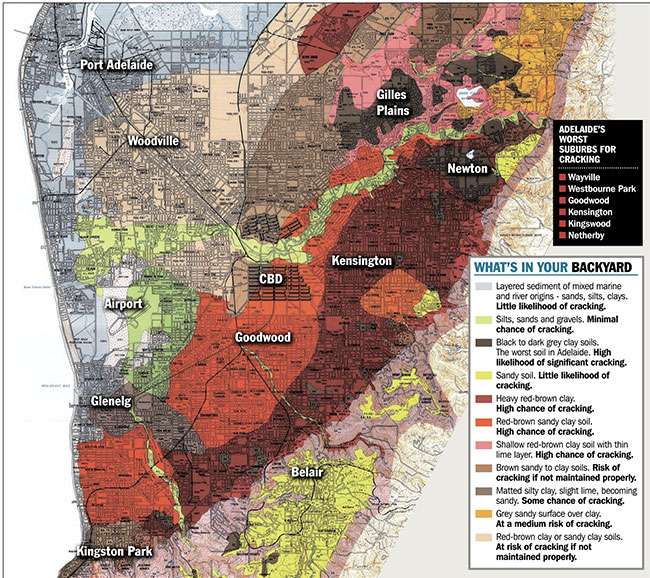 Inspex Inspections will help you with this big financial decision. So keep your eyes wide open!